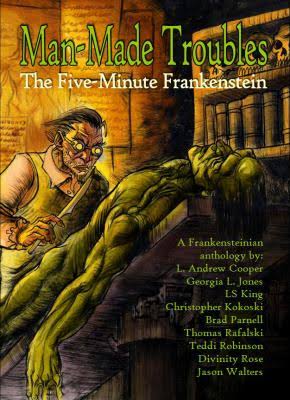 Written for and first published in “Man Made Troubles: Five Minute Frankensteins” by Blackwyrm Publishing, 2012 -1500 word limit , must have “Frankenstein” themes or be related to original story – Buy the book :

“The stories by Georgia L. Jones, Divinity Rose, Christopher Kokoski, and Jason S. Walters stand out, but all the tales were fine entries in this quirky collection.” – Ideas Like Bullets, Review”

Things That Were Dead

I hate to say it, but it was indeed a dark and stormy night. Thunder rumbled, lightning flashed, and the skies refunded borrowed water with an intensity saved for stories like these. Entire tragedies were cast in shadow on the concrete walls each time a bolt of lightning lit up the room. Exposed duct work and piles of clutter became Shakespeare’s settings and players in continual flashes of wall theater, competing for real estate with the shadow people of yonder realms. Branches swished wildly in the air outside while light and dark danced with rapid-fire bursts of sound as if nature had mastered Flamenco. The glow of monitors amongst piles of electronics and innards from unknown computer donors was the only thing interrupting the complete contrast between the two forces within the basement room.

The man sat in the corner, watching the show and studying the body before him. The flashes in the small windows near the ceiling created a grim strobing reality of the bed before him where an arm protruded from a mess of mismatched generic throws and hospital blankets. Even in the intermittent visibility, he could see the scars that lined her arms. He knew what had to be done. It wasn’t going to be pleasant.

He stood and ran his hands down the length of the coat he wore. He’d waited long enough for the right moment. He walked over to the wall and flipped the switch to wake her. The light flooded the room, but gods threw temperatures at each other above him like drunken bowlers with something to prove, and their next strike exed the power with a surge.

He’d never met a sailor, so he swore like his grandmother after a bottle of Absolut. He could see nothing without the glow of the computer monitors; he took his I-phone from his pocket to use as a flashlight but tripped, and the smart phone flew from his hand across the dark room as if its navigation system was guiding it into the shelf of knick-knacks in the corner. As the Disney fairies and music boxes came crashing down, the girl in the bed came flying up.

A groan bounced off the walls around them. “Whoaaaa. What the…?”

The guy straightened himself and coat before speaking, “Welcome back to the living, sweetheart.”

“My head is killing me!”

“Common side effect. You drank enough by 8 p.m. to give half of Hollywood a run for their money. I was lucky to have help hauling you in before the storm really started.”

“Why are you standing there in the dark?”

The lightning flashed, and he saw the worry on her face as her eyes darted around the room to her computer creations. He knew the dark screens staring back at her threatened potential long term failure. Power had a hard enough time running through the pieced together hardware to run shaky systems. The monster arrangements barely kept her online. Potentially fried motherboards did not trigger abandonment issues like the fried relationship with a mother who chose an abusive man over her, but they still caused a certain amount of panic over the loss of a lifeline. He also knew that she preferred technical difficulties to emotional ones because it was much easier for her to engineer a solution out of the piles of junk she had laying around. Unfortunately, there was no amount of jury rigging or Macguyver-ing that could piece together the frayed ends of their relationship.

“There’s no easy way to say this,” she heard from the darkness. Her eyes scanned the space around her until the darkness was interrupted again, and she found his face closer to her than she expected. She jumped a bit and put her arm out to him, reaching for something to hold onto.

He took her hand and rubbed the scars on her arm tenderly. “I know you’ve been through a lot in your life, and a lot of people have left you behind. I hate to be one of those people, but I can’t stay anymore. It’s time for me to ease on down the road.”

“What do you mean ‘ease on down the road’? Are you looking for the Wiz?” Her voice wavered. Anxiety was having its way with her, and he fought the urge to laugh. She had always been entertaining.

“Maybe. I just need something more.”

“The Wiz was an illusion, you know.”

“Why? Look around! Why not? There’s nothing to keep me here. I’m thirty. I don’t want to carry my girlfriend into her basement apartment, where she lives so she can take her of her dysfunctional friend’s family. I want someone who knows who they are, someone who has some sort of life of their own. I need to get out; I need to breathe. I need to feel alive.”

“You said I brought you to life.”

“You did in ways, but that can’t sustain me. That’s part of the problem. You’re always saving someone or bringing them to life but look at your own! You need a life.”

The room lit up and he waved at the unfinished collages on the walls that would be gifts to others one day, the stacks of electronics that would become part of her systems, a stack of broken things waiting to be glued, the forty-year-old inherited classical hardback books that were falling apart on a shelf near the door, and the boxes of things she’d taken from a friend to find a home for.

“Your computers, your furniture, your friends – all projects! You’re so busy with your projects, you don’t even realize the stitched together carcass you call a life! Sure. Your efforts mean a lot to others, but what kind of life is that? Who are you? Do you know? ”

They sat in the dark as the silence screamed the truth. He left her side, and she let him go.

“I…I hope you find what you’re looking for.”

“Thanks,” he replied. “I hope you find something to call your own.”

Lightning flashed, and she saw him turn towards the door. She heard it close in the dark. Another flash arrived just in time to see a book fall from the shelf where he had just been standing. She felt her way across the room to pick up the book just so she would have something to do. She stood alone, wishing her computers were working. She had always believed if she were cut off from Facebook or chat rooms, she would be terrified and alone. This disconnected darkness brought her a startling revelation: she was never truly alone. It might have been better if she were. Thoughts crept towards her from every corner of the room as if they had crawled from open graves.

She didn’t need the light to see the piles of stuff: the piles of other people. Almost everything she owned had been given to her by others or was stuff she could find for free or very cheap. The enormous amount of Jack Daniels she had consumed the evening before may have given her one heck of a hangover, but it certainly didn’t let her forget that her own psyche was full of words tossed at her from those she had tried to love. She was as carelessly created as the space she lived in and had indeed crafted a life out of things others were throwing away: things that were dead to them.

She flipped the book over again and again nervously. Although she couldn’t see, she sat staring through the darkness at it: just glad to have something in her hands. The storm raged on, an appropriate soundtrack to her revelations. The gods continued throwing temperatures at each other above her like drunken bowlers with something to prove. Their strike made an impact this time, revealing the title etched into the hardback cover that suddenly mocked her.

She clutched the book to her chest, leaned against the door, and released an ironic laugh as tears found their way to her eyes for the first time in years. “Frankenstein,” she muttered as she slid to the floor. “Story of my life.”